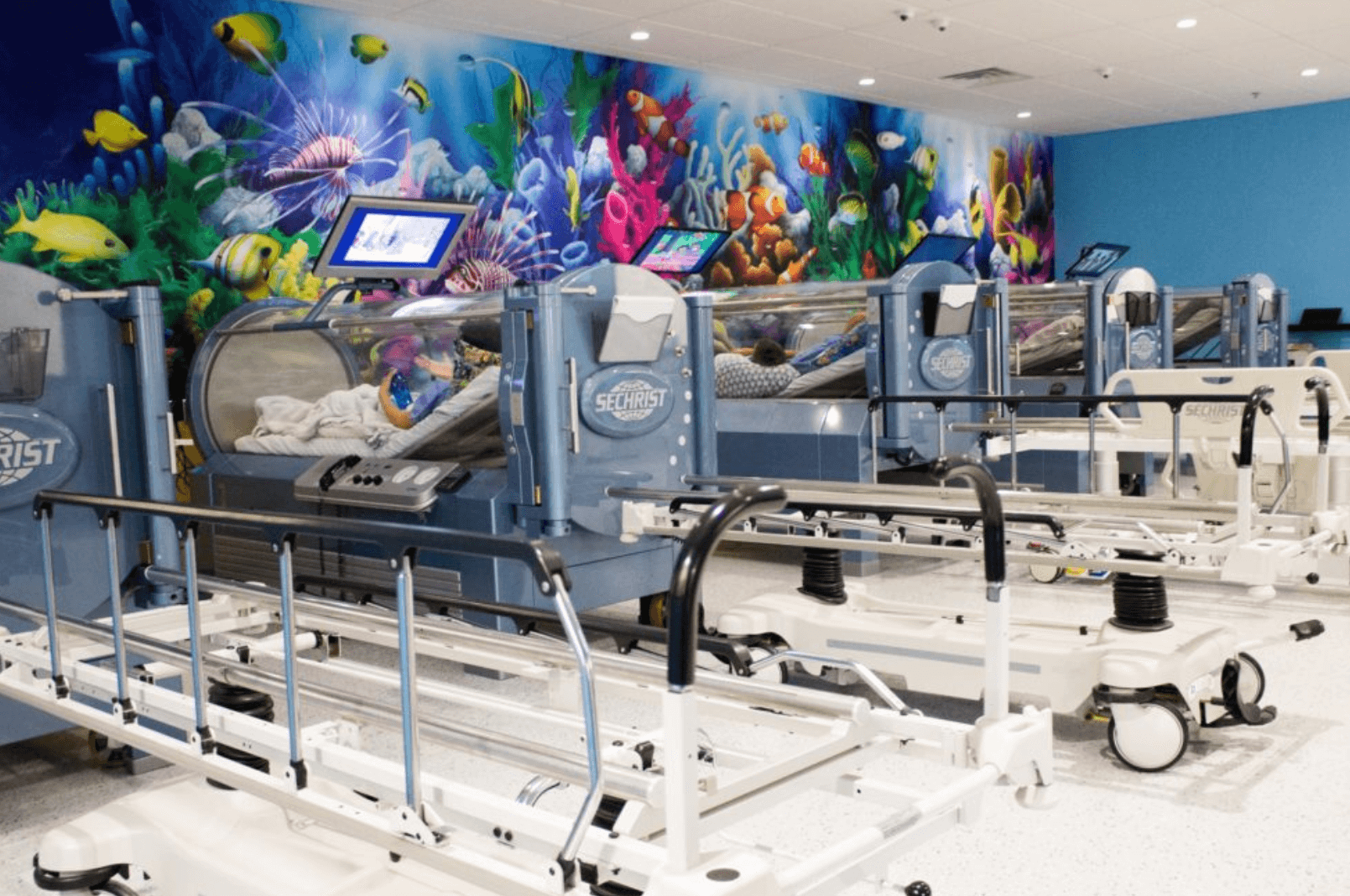 At Oxford Recovery Center our Seichrist Chambers can generate 3 ATA of pressure, and typical treatment protocols are between 2.0ATA and 2.4ATA. So, at 3.0ATA (3.0ATA x 760mmHg x 100%=2,280mmHg) we can deliver almost ten times the amount of medical grade oxygen to you. At our typical treatment depths, we generate 1,520 mmHg of pressure at 2 ATA (nearly seven times as much oxygen) and 1,824mmHg at 2.4ATA (almost eight times as much oxygen as an inflatable bag.

Oxford Recovery Center believes it is very important to treat at a research validated protocol. All valid scientific studies demonstrating the benefit of hyperbaric therapy were performed at pressures higher than those able to be achieved in an inflatable bag. You cannot implement those benefits at the much lower pressures from inflatable bags.

The FDA does not recognize inflatable bags as a medical device for hyperbaric oxygen treatment. You will never find them in any reputable hospital or medical office. The FDA only recognizes inflatable bags as a device used to treat altitude sickness during transport to a definitive medical facility. Scientific literature shows that oxygen becomes bacteriostatic ( a biological or chemical agent that prevents bacteria from reproducing) at 1.5 ATA. Since inflatable bags can only produce 1.3ATA they not only can’t prevent bacteria from growing, they can enhance the growth of some molds, fungus, and aerobic bacteria!

Parents and patients are also being informed that they can attach an Oxygen concentrator to the mild HBO to increase Oxygen delivery to the bag’s occupants. This is an immediate concern as the risk of fire is significantly elevated when parents indicate that they are also using computer games and DVDs inside the ‘chamber’ to keep the child entertained. This is completely inappropriate and may well end up with somebody being severely burnt or losing their life! The additional use of Oxygen concentrators and internal use of electronic devices are in direct conflict with manufacturer’s recommendations notwithstanding the USA FDA product standards. Similar standards exist in Australia.

Many of the mild chamber manufacture’s websites make a deliberate attempt to embrace a range of medical conditions and disorders under the banner of ‘hyperbaric therapy.’ The public is ‘none the wiser.’ However, the evidence supporting the use of Hyperbaric Oxygenation in these conditions and disorders are on the basis of applications using 100% Oxygen at pressures typically 1.75-2.5 ATA or greater. Hyperbaric oxygen therapy is about saturating the body with oxygen. This is most effectively done by delivering 100 percent oxygen through two different pathways: by inhalation through your airways and by absorption through your skin.

The bottom line, not all “hyperbarics” are created equal. Do your research, look at the Peer Reviewed research that is out there, think about what makes sense, and think safety first.

When looking for a provider of hyperbaric oxygen therapy inquire about the chambers they use, the age of chambers, service records, oxygen provider, do they require a mask or hood, and are their CHT’s on staff and someone who has gone through the Safety Director course.

Want more information? Follow the link to this article by Robert L. Sands: Dispelling the Confusion and Controversy over _Soft_ or _Hard_ Chambers