Understanding autism as a complex, biologically based neurological disorder is key in determining the best treatments options Back To Autism Page

Traditionally, the diagnosis of autism has been based on observed behavior and subsequent treatment focused primarily on alleviating challenging behaviors. However, there is a very real biomedical component to autism in which underlying medical issues cause or contribute to autistic behavior. Some of the most common problems include:

These physical and environmental factors limit the nutrients available to the brain and body, resulting in damage to cellular, metabolic, and central nervous system functionality. Every individual with autism exhibits unique behavioral and cognitive symptoms with varying degrees of severity.

Common symptoms can also include:

Genetic susceptibility to autism may determine who develops this complex disorder, but nutrient deficiencies and food allergies strongly influence the severity of symptoms. Exposure to toxins (particularly metals) and imbalanced microbial growth in the GI tract contribute to pathological responses to food. Yeast (most commonly, Candida), parasites, viruses, and bacteria, particularly Clostridia, all have the potential to act as pathogens.

The following are peripheral issues seen in autism that are exacerbated by abnormal intestinal flora:

How does ASD affect a child’s brain?

When a typical person focuses on a task or generates speech, there is an increase in blood flow to the brain which supplies the brain with more oxygen and glucose, giving the cells their needed energy to perform their task.

In autistic children, several studies have shown the opposite, they actually have diminished blood flow to begin with, and when their brain is attempting to perform a task, such as generating speech or focusing, their blood flow does not increase giving them the needed oxygen and glucose the cells need.

This indication of damage are a result of cerebral hypoxia (impaired oxygen delivery), resulting from hypoperfusion.

What is Cerebral Hypoperfusion?

Cerebral Hypoperfusion is simply decreased blood flow to the brain. There have been numerous studies in the medical literature demonstrating hypoperfusion in ASD children, documenting as many as 86% of the children being affected. One way this has been documented is through the use of SPECT scans. One study conducted by Dr. James Wilcox in the Department of Psychiatry at Texas Tech University Health Sciences Center showed the hypoperfusion typically worsened with the age of the child, becoming “quite profound” in older children. The diminished blood flow can be seen with a clear correlation to many core autistic symptoms/behaviors. 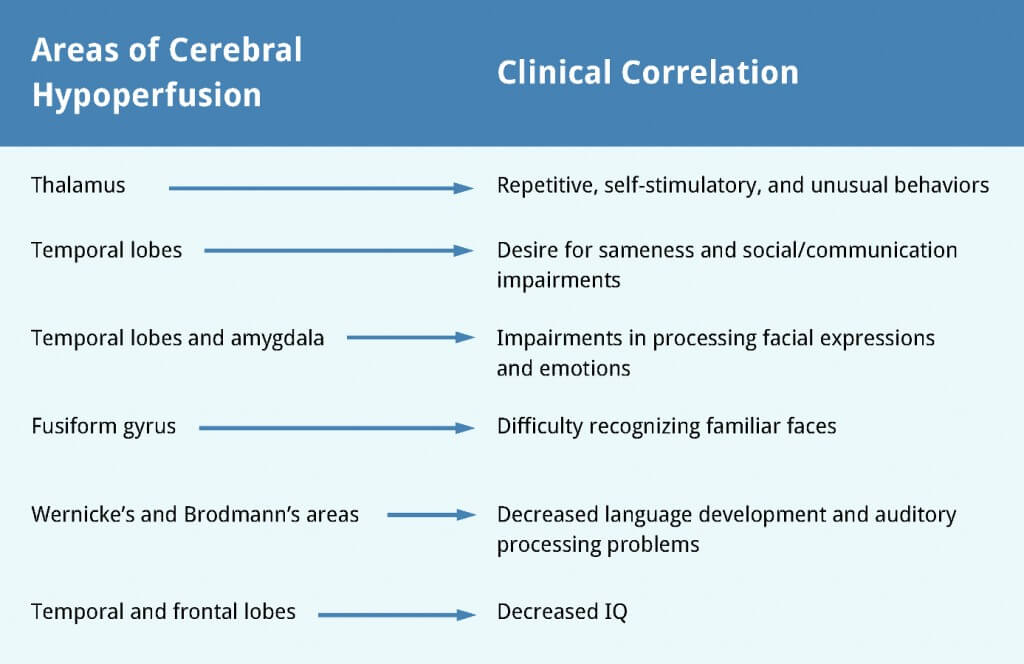 Where does the hypoperfusion come from?

The actual cause of hypoperfusion in ASD children is still being researched; however, many researchers are looking seriously at inflammation as the core cause.

When Johns Hopkins University researchers published their findings of inflammation in patients with autism, they recommended potential therapeutic interventions focusing on “control of its detrimental effects.”

There are dozens of studies showing the correlation between gastrointestinal tract inflammation and autism. This has been termed autistic enterocolitis or chronic ileocolonic lymphoid nodulal hyperplasia (LNH). The characteristics of this condition are: inflammation of the colon, stomach, and small intestines. According to Wakefield, as many as 90% of children with autism have gastrointestinal symptoms (such as, diarrhea, constipation) and 68% have moderate to severe problems.