WHAT ARE ORGANIC ACIDS?

Organic acids are chemical compounds excreted in the urine of mammals that are products of metabolism. Metabolism is the sum of chemical reactions in living beings by which the body builds new molecules and breaks down molecules to eliminate waste products and produce energy. Organic acids are organic compounds that are acidic. Organic acids are substances in which carbon and hydrogen are always present but which may also contain the elements of oxygen, nitrogen, sulfur, and phosphorus as well.

HOW ARE ORGANIC ACIDS MEASURED FOR MEDICAL REASONS?

HOW ARE ORGANIC ACIDS TESTS USED FOR THE TREATMENT OF DISEASES?

Clinical presentations of organic acidemias vary widely and may include failure to thrive, mental and/or developmen­tal retardation, hypo- or hyperglycemia, encephalopathy, lethargy, hyperactivity, seizures, dermatitis, dysmorphic facial features, microcephaly, macrocephaly, anemia and/or immune deficiency with frequent infections, ketosis and/or lactic acidosis, hearing, speech, or visual impairment, peripheral neuropathy, sudden cardiorespiratory arrest, nau­sea and coma.  Many organic acidemias are associated with slight to marked increases in plasma ammonia.  Some organic acidemias may be chronic and present in the first few days of life. In others, such as medium chain acyl dehydrogenase deficiency, a child might appear completely normal until a potentially fatal episode of cardiorespiratory arrest. 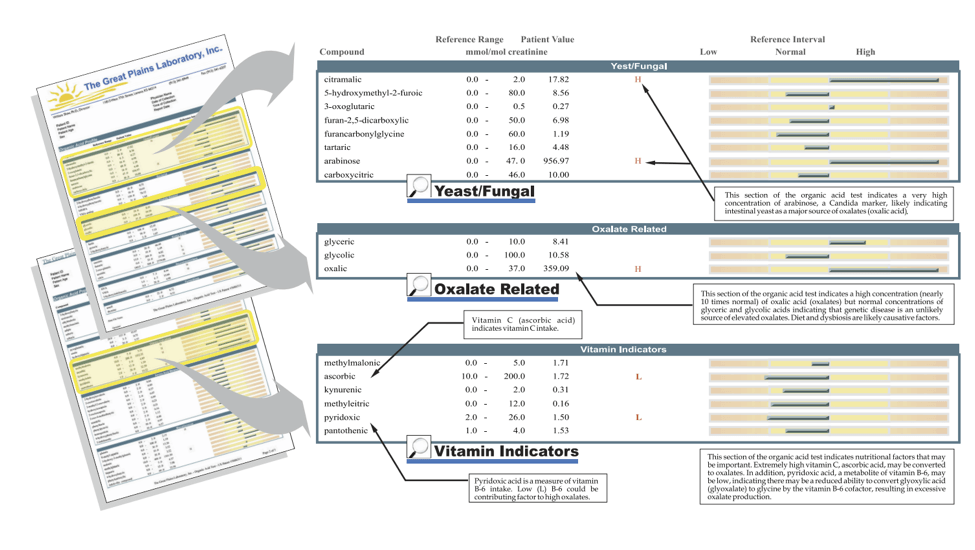 Many other non-genetic factors can also alter human metabolism. Toxic amounts of the drug acetaminophen and other toxic chemicals can use up a key molecule, glutathione, that helps the body detoxify, leading to the overproduction of the organic acid pyroglutamic acid. Tumors of the adrenal gland called pheochromacytomas can cause the overproduction of the neurotransmitter epinephrine, resulting in marked increases in its metabolite, vanillylmandelic acid (VMA). Genetic diseases of the mitochondria, the cell’s energy source, as well as toxic chemicals that disrupt mitochondrial function cause elevation of succinic acid.  Succinic acid is a key intermediate of both the Kreb’s cycle and the electron transport chain that generates adenosine triphosphate (ATP), the currency for most of the body’s energy transactions.

A number of organic acids directly or indirectly indicate deficiencies of critical vitamins such as vitamin B12, pantothenic acid, biotin, and others. One of the most important uses of the organic acids test is as an indicator of dysbiosis, an abnormal overgrowth of yeast and bacteria in the intestinal tract. Some of these bacterial byproducts from the intestine enter the blood stream and may alter the metabolism of neurotransmitters such as dopamine.

The Organic Acids Test (OAT) offers a comprehensive metabolic snapshot of a patient’s overall health with over 70 markers.  It provides an accurate evaluation of intestinal yeast and bacteria.  Abnormally high levels of these microorganisms can cause or worsen behavior disorders, hyperactivity, movement disorders, fatigue and immune function. Many people with chronic illnesses and neurological disorders often excrete several abnormal organic acids in their urine. The cause of these high levels could include oral antibiotic use, high sugar diets, immune deficiencies, acquired infections, as well as genetic factors.

Our Organic Acids Test also includes markers for vitamin and mineral levels, oxidative stress, neurotransmitter levels, and is the only OAT to include markers for oxalates, which are highly correlated with many chronic illnesses.