Glyphosate is the world’s most widely produced herbicide and is the primary toxic chemical in Roundup™, as well as in many other herbicides. In addition, it is a broad-spectrum herbicide that is used in more than 700 different products from agriculture and forestry to home use. Glyphosate was introduced in the 1970s to kill weeds by targeting the enzymes that produce the amino acids tyrosine, tryptophan, and phenylalanine. 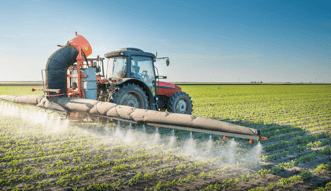 The enzymes of many bacteria are also susceptible to inhibition by this chemical, thus altering the flora of many animals. Usage of glyphosate has since amplified, after the introduction of genetically modified (GMO) glyphosate-resistant crops that can grow well in the presence of this chemical in soil. In addition, toxicity of the surfactant commonly mixed with glyphosate, polyoxyethyleneamine (POEA), is greater than the toxicity of glyphosate alone (1). In addition, in 2014 Enlist Duo™, a herbicide product which contains a 2,4-dichlorophenoxyacetic acid (2,4-D) salt and glyphosate, was approved for use in Canada and the U.S. for use on genetically modified soybeans and genetically modified maize, both of which were modified to be resistant to both 2,4-D and glyphosate. 2,4-D has many toxic effects of its own and can be measured in the GPL-TOX test.

Recent studies have discovered glyphosate exposure to be a cause of many chronic health problems. It can enter the body by direct absorption through the skin, by eating foods treated with glyphosate, or by drinking water contaminated with glyphosate. A recent study (2) stated that a coherent body of evidence indicates that glyphosate could be toxic below the regulatory lowest observed adverse effect level for chronic toxic effects, and that it has teratogenic, tumorigenic and hepatorenal effects that can be explained by endocrine disruption and oxidative stress, causing metabolic alterations, depending on dose and exposure time. The World Health Organization International Agency for Research on Cancer published a summary in March 2015 that classified glyphosate as a probable carcinogen in humans (3). Possible cancers linked to glyphosate exposure include non-Hodgkin lymphoma, renal tubule carcinoma, pancreatic islet-cell adenoma, and skin tumors. Studies have also indicated that glyphosate disrupts the microbiome in the intestine, causing a decrease in the ratio of beneficial to harmful bacteria (4). Thus, highly pathogenic bacteria such as Salmonella entritidis, Salmonellagallinarum, Salmonella typhimurium, Clostridium perfringens, and Clostridium botulinum are highly resistant to glyphosate but most beneficial bacteria such as Enterococcus faecalis, Enterococcus faecium, Bacillus badius, Bifidobacterium adolescentis, and Lactobacillus spp. were found to be moderately to highly susceptible. The relationship between the microbiome of the intestine and overall human health is still unclear, but current research indicates that disruption of the microbiome could cause diseases such as metabolic disorder, diabetes, depression, autism, cardiovascular disease, and autoimmune disease. 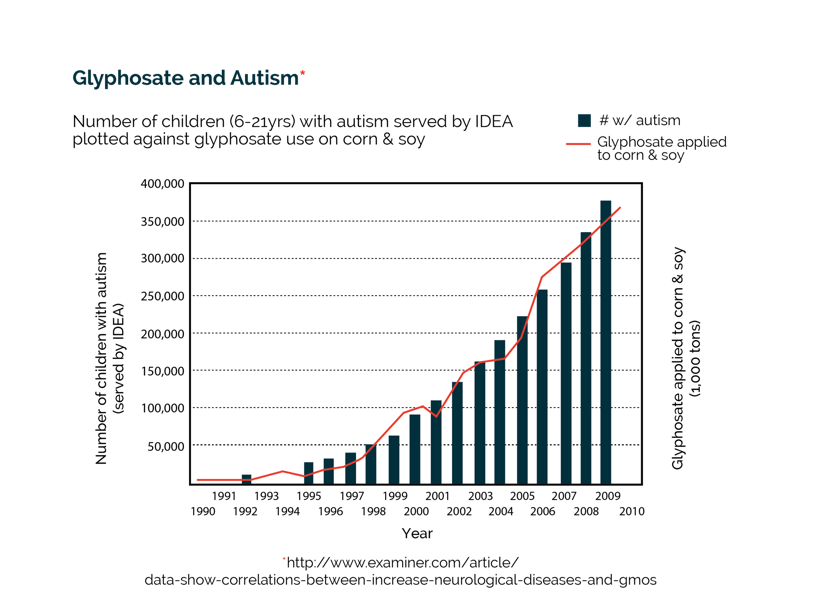 Treatment of glyphosate toxicity should be centered on determining the route of introduction and avoiding future exposure. Eating non-GMO (genetically modified organism) foods and drinking reverse osmosis water are two of the best ways to avoid glyphosate. A recent study showed that people eating organic food had considerably lower concentrations of glyphosate in the urine (2). Drinking extra water may also be beneficial since glyphosate is water soluble. More than 90% of corn and soy used are now of the GMO type. In addition, non-GMO wheat is commonly treated with glyphosate as a drying procedure. Glyphosate is somewhat volatile and a high percentage of rain samples contained glyphosate (2).

Another study found that glyphosate accumulated in bones. Considering the strong chelating ability of glyphosate for calcium, accumulation in bones is not surprising. Other results showed that glyphosate is detectable in intestine, liver, muscle, spleen and kidney tissue (5). A 54-year-old man who accidentally sprayed himself with glyphosate developed disseminated skin lesions six hours after the accident (6). One month later, he developed a symmetrical parkinsonian syndrome.

The chelating ability of glyphosate also extends to toxic metals (7). The high incidence of kidney disease of unknown etiology (renal tubular nephropathy) has reached epidemic proportions among young male farm workers in sub-regions of the Pacific coasts of the Central American countries of El Salvador, Nicaragua, Costa Rica, India, and Sri Lanka (8). The researchers propose that glyphosate forms stable chelates with a variety of toxic metals that are then ingested in the food and water or in the case of rice paddy workers, may be absorbed through the skin. These glyphosate-heavy metal chelates reach the kidney where the toxic metals damage the kidney. These authors propose that these chelates accumulate in hard water and clay soils and persist for years, compared to much shorter periods of persistence for non-chelated glyphosate. Furthermore, these chelates may not be detected by common analytical chemistry methods which can only detect free glyphosate, thus dramatically reducing estimates of glyphosate persistence in the environment when metals are high (for example, in clay soil or hard water).

High correlations exist between glyphosate usage and numerous chronic illnesses, including autism, which is shown in the figure on the first page (9). Other disease incidences with high correlations include hypertension, stroke, diabetes , obesity, lipoprotein metabolism disorder , Alzheimer’s, senile dementia, Parkinson’s, multiple sclerosis, inflammatory bowel disease, intestinal infections, end stage renal disease, acute kidney failure, cancers of the thyroid, liver, bladder, pancreas, kidney, and myeloid leukemia (9). Correlations are not causations, yet they raise concern over the use of a chemical to which all life on earth appears to be exposed. 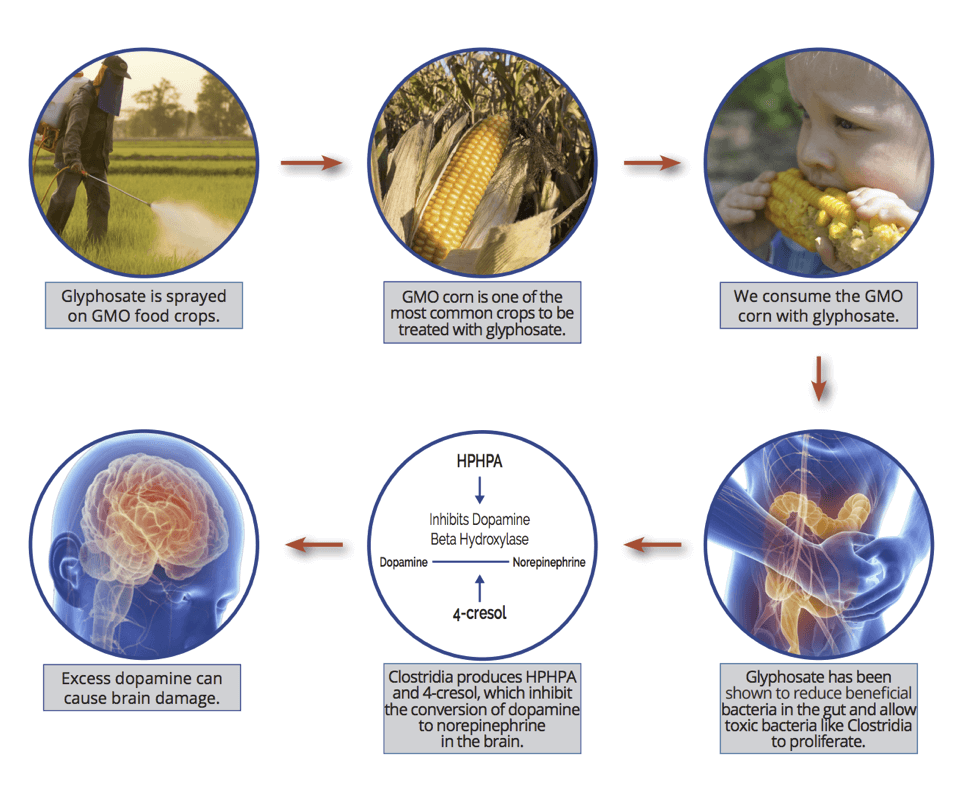